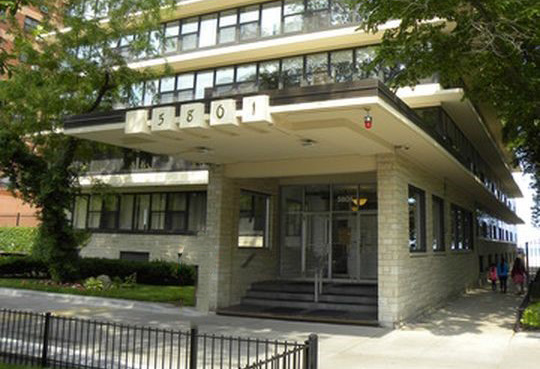 CBB members and guests enjoyed a perfect Chicago beach day while touring one of the fabulous Mid-Century high-rise buildings in the Edgewater neighborhood at Hollywood beach.  The lakeside lunch was held on the ground-level private patio for residents of this building.  Located right on the beach (Lake Michigan), the patio is literally at sand level and provides amazing views, while mature trees provided shade for one of Chicago’s rare sunny mid 70-degree days. We divided into two groups to tour the building and learn its history. Our hosts, CBB members Lee Campbell and Rolando Bergado,  led us through the building to see their spectacular two-bedroom lakefront unit, plus another three bedroom west-facing unit.

Completed in 1955, the building is 19 stories tall and contains 90 condominiums. It was originally called Harbor View Apartments, designed by Erwin G. Fredrick and built by Welso Contruction Company. The design was extremely futuristic for its time, with wide horizontal fins dividing a nearly all-glass façade. The lobby retains the original dramatic black terrazzo floor and has been tastefully updated. The building was designed with luxury in mind and views are panoramic due to the orientation of each unit. The A unit (west-facing 3 BR) is just over 1600 SF; the C and D units (lake facing 2BR) are just under 1600 SF and were originally constructed as 3BR units, but have all been converted to large 2BR units. The B and E units (north and south facing respectively) are just over 1200 SF 2BR units.

The architect also designed the neighboring building (5815) completed in 1952. It is much more industrial but an interesting comparison, with the concrete structure exposed on the exterior.

We then enjoyed a sumptuous buffet lunch on the patio while getting a chance to socialize and meet new members.

The Edgewater neighborhood is considered Chicago’s “Miami beach” as it is the largest area of high-rise buildings on the beach side of Lake Shore Drive. The neighborhood name references the Edgewater Beach Hotel, a luxury hotel that attracted wealthy Chicagoans as well as celebrities, was built there in 1916.