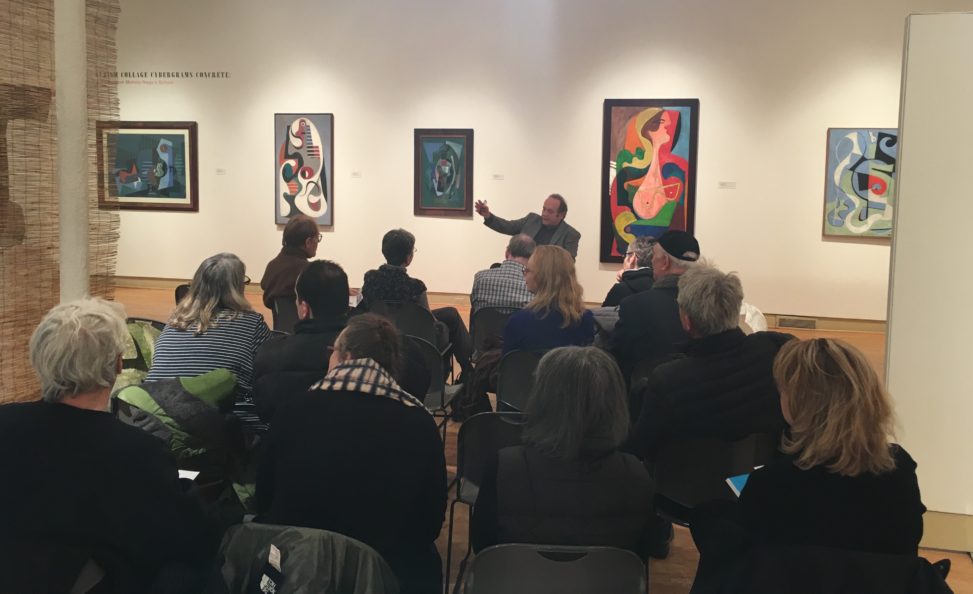 We spent  the afternoon with Paul Young, executive director of Bauhaus Chicago, touring the Cubism Collage Cybergrams Concrete exhibit at the Ukrainian Institute of Modern Art in Chicago.   4 artist who worked under Bauhaus Master Laszlo Moholy-Nagy,  either at the New Bauhaus 1937-1938 or later at the Institute of Design 1947-1951, were on display.

Gretchen Schoeninger Corazzo  whose works  include sculpture in concrete, wood and plaster drew attention from the group with her seed paintings, perhaps reminiscent of our own childhood.

Tadao Takano cybergrams explored the usage of sophisticated computerized photography.  Director Young’s placement of the images showed the progression and transition of his work.

Robert Nickle’s Collage pieces were boarder by frames of stainless steel  and absent of the artist’s signature.  Instead there was a circular opening in the back of the frame that referenced the likeness of the Mr. Nickle.  Other’s touring this show might not have had the opportunity to see this little secret.  Thanks again to curator Young for indulging us.

And lastly, Alexander Corazzo’s oil on canvas pieces were bright and rich.  The fact that his pieces were included in this exhibit is interesting since he and New Bauhaus founder Moholy-Nagy had a falling out in 1938 and went separate ways.  He later went on to study with Mies van der Rohe.

We appreciate the Ukrainian Institute and Bauhaus Chicago for hosting this event.  The exhibit closed on Jan 29th, 2017.  They are looking for a new, possibly permanent, home to show their incredible works.  I offered my house but they are going to keep their options open.

Born in France, Alexander Corazzo attended the New Bauhaus in its inaugural year (1937-38). He spent a decade painting and then began studying architecture in 1943 with Mies van der Rohe, working in his office, then continuing his practice of architecture. In this exhibition, Corazzo is represented by his Cubist paintings created 1932-42; the structural aesthetic of hard edges and flat planes of color in his works on canvas foreshadow Corazzo’s later career of building actual structures in the landscape.

Gretchen Schoeninger Corazzo, too, started at the New Bauhaus that first year, studying with Ukrainian-born artist Alexander Archipenko, whose influence is apparent in her plaster and cast concrete works on display here. Schoeninger Corazzo’s very long career (she was still working steadily last year at age 102) is marked with wide-ranging material experimentation, including printmaking, weaving, collages and “paintings” made entirely from seeds, also included in this exhibition.

Like Schoeninger Corazzo, Robert Nickle also used non-art materials to create his multimedia collages, which he started making even before attending Moholy-Nagy’s Institute of Design (a later iteration of the New Bauhaus). For Nickle, (who was also a graphic designer and influential teacher at the University of Illinois in Chicago), the scraps and detritus he found in the street became surrogates for brushstrokes, arranged in abstracted compositions made of real life objects.

Tadao Takano, also a beloved teacher at UIC, began making repeated, machine-aided photographic works in the early 1980s and shortly after developed an entirely new medium he called “cybergrams,” which he created using an IBM computer and robotic machine. Takano’s innovative cybergrams, a selection of which is on display here, are the result of a laborious dance of pinpointed light on photosensitive paper.

Curated by T. Paul Young with the Bauhaus Chicago Foundation