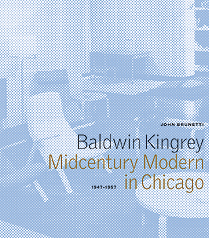 Chicago Bauhaus & Beyond members were invited to Richard Wright’s auction gallery along with others for a fantastic panel discussion and booksigning of the new book, Baldwin Kingery, Mid-century Modern in Chicago, 1947-1957. This book, by John Brunetti, was conceived by Kitty Baldwin Weese in order to document and share the experience of the successful downtown Chicago retailer. Located at Ohio Street and Michigan Avenue, Baldwin Kingrey operated as a design center offering imported modern European furniture at affordable prices. Chicago was a hotbed of ingenuity and scholarly applications to design, with many of the celebrated creators of the 20th century modern movement active here. This story is illustrated with many photos and well-researched text, through many interactions between designers, professors and students of schools including the New Bauhaus and the Institute of Design.

Panelists included John Brunetti, Kitty Baldwin Weese, Don Dimmet, Ben Weese, Marcia Weese, John Albergo, and Lisa Albergo, each with personal memories of how this business operated. The casual panel discussion reminded attendees of America’s post-WWII optimism and the creativity which spawned from running a business in a true spirit of fun, which was a great recipe for success.